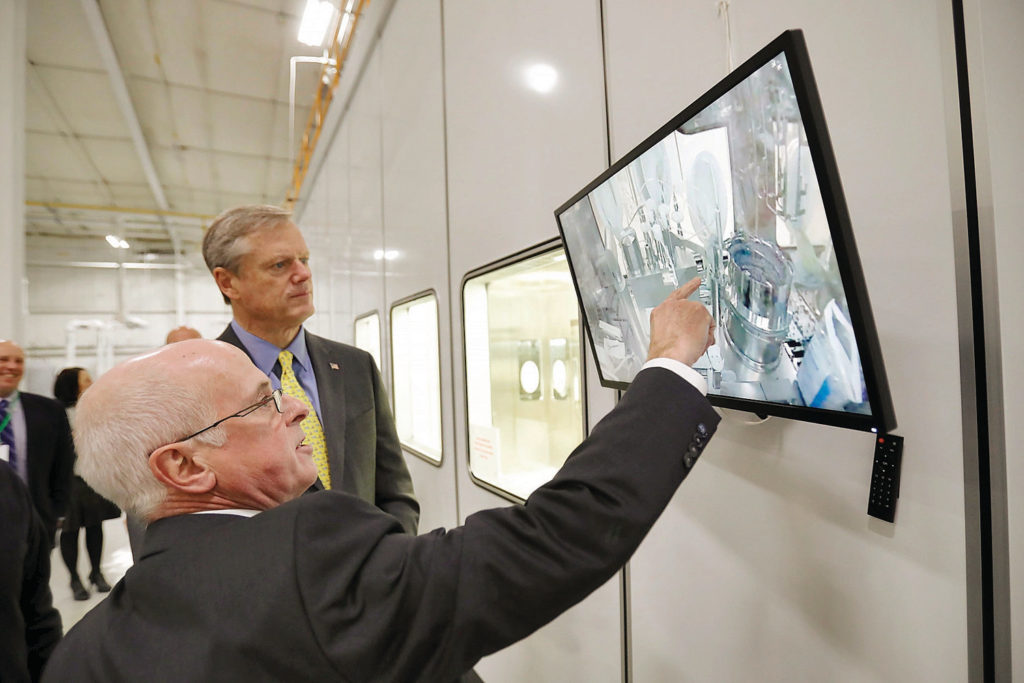 THE BERKSHIRE EAGLE
By Amanda Drane

LEE — One day after the inauguration for his second term, Gov. Charlie Baker already had decided what his administration’s top priority would be for Berkshire County over the next four years.Gov. Charlie Baker, rear, is given a tour Friday of Berkshire Sterile Manufacturing in Lee by company co-owner Shawn Kinney. Baker said the movement at Berkshire Sterile is emblematic of the “creativity, ingenuity and innovation” that makes Massachusetts attractive.”The No. 1 priority is employment,” Baker said Friday.

The governor also is eager to get broadband work in Western Massachusetts “kick-started again,” he told members of the media, during a visit to Berkshire Sterile Manufacturing.

The Lee company, which employs 90 people, converts drugs — usually powdered — into an injectable form. The vials it sends out usually are used in clinical trials, company co-owner Shawn Kinney said, like those recently used in trials for orthopedic and cancer treatments.

The company is undergoing an expansion that Kinney said could cost as much as $10 million.

Demand for its work is high, Kinney said, and come July, the company aims to expand its staff to 120. He said the achievement would double an expectation set with a tax-increment financing deal with the town.

Baker said the movement at Berkshire Sterile is emblematic of the “creativity, ingenuity and innovation” that makes Massachusetts attractive.

“There’s a tremendous amount of momentum here, and it’s exactly the right kind,” he said.

The company, founded in 2014, had a hard time finding skilled employees to staff the ranks. The state-sponsored training program that emerged gave three months of job training for company employees, through the state’s Massachusetts Life Sciences Center, “at basically no cost to us,” Kinney said. The commonwealth supported the training through $710,000 in tax incentives that helped his company add 48 new employees.

The state also funneled development support to the manufacturer, securing an initial $4 million business loan from Berkshire Bank, and through a new $2 million loan to support the expansion.

Both Berkshire mayors, the Berkshire legislative delegation and Sheriff Thomas Bowler showed up for the event.

Pittsfield Mayor Linda Tyer said it was important to support the developing Berkshire ecosystem around advanced manufacturing. The idea is to foster a strong employment pipeline involving Taconic High School, Berkshire Community College, the Berkshire Innovation Center and jobs like those available at Berkshire Sterile Manufacturing.

“We cannot take our eye off it,” she said of the “emerging ecosystem.”

“We have to stay focused, because it is really in its infancy.”

Berkshire Sterile Manufacturing and the commonwealth already are building a job pipeline, she said, and “that success isn’t just inside these four walls.” It ripples into the local economy.

Berkshire Sterile Manufacturing pumps $5.6 million into the local economy each year in the form of salaries to its employees, Kinney said. It also has spent $2.5 million on local tradesmen, and has made a $12.6 million capital investment in the Pleasant Street property.

Kinney said the company is keeping talented people in the commonwealth, as well as drawing in others from out of state. And politicians in the room said that was a foundation on which they aim to build.

Baker asked the room: What could attract complementary companies to the area? Kinney said the low cost of property in Berkshire County is a strong selling point, and officials in the room also cited a workforce waiting in the wings.

Baker, introduced by Kinney as “the most popular governor in the nation,” said he came to town Friday for updates on a project that state officials and local lenders “made a bet on” a few years back. He said the internship model fueling the company’s expansion efforts is unique and something he might look to replicate.

Baker also said he’d like to connect Berkshire Sterile and incoming Wayfair with the Berkshire Innovation Center, which recently broke ground at the William Stanley Business Park in Pittsfield.