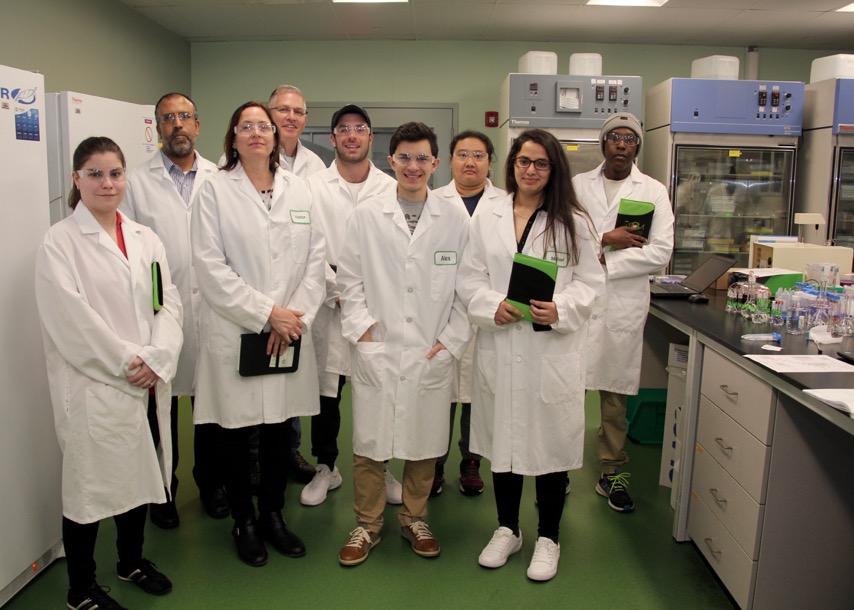 “This field is growing,” said Abdel-Maksoud, of Amherst. “There’s a lot of discovery and excitement in this field. Every day there’s something new.”

He and seven other students in the biotechnology program at STCC recently got a close-up look at a biotech company in Western Massachusetts. They visited Berkshire Sterile Manufacturing in Lee and examined vials and syringes, among other biotech devices, and looked at state-of-the-art equipment designed to produce drugs. They donned white lab coats and slipped on disposable blue shoe covers to keep the floors clean in one section of the plant. They observed scientists in action at the four-year-old company, which is looking to hire.

“We find that people with associate degrees have the necessary background in science and math skills, and usually writing skills, and they can do quite well in the position,” said Shawn Kinney, CEO of Berkshire Sterile Manufacturing

The company’s CEO, Shawn Kinney, offered an interactive tour of his facility, encouraging students to ask questions about everything from the lab equipment and procedures to career prospects in biotechnology.

BSM produces small-scale injectable drugs for clinical use. Pharmaceutical companies ship drug substances to BSM to formulate, sterilize and put into vials and syringes. The final drug product is returned to the pharmaceutical company to perform clinical trials to determine if the drug can cure diseases like cancer, Kinney said.

“We’ve had some fascinating products in here that are in very early clinical phase studies,” he said.

Kinney detailed the meticulous process of manufacturing drugs that are safe for humans. His company’s mission is to provide the safest sterile drug products possible for clinical use. In addition to being sterile, the drug must have the proper concentration (too much would be harmful, while too little would be ineffective), and the drug must be tested for the presence of endotoxins, which can cause fevers and allergic reactions in humans.

STCC Professor Lisa Rapp, the Biotechnology Department chair, said she has taught her students some of the same concepts Kinney was highlighting.

“We have specifically designed our program curriculum with input from industry and academic partners to prepare students for employment in the biotechnology industry,” Rapp said. “Our program is very lab intensive and provides hands-on training to students who plan to work in industry or continue their education.”

STCC President John B. Cook said, “This is a great example of how our talented faculty put the ‘T’ in STCC.  Biotech is a key industry, and I am pleased our students are gaining industry-direct perspective.”

“An associate degree is a great starting point for people,” Kinney said. “We do also have a tuition reimbursement program. We’re very pro-education. We encourage people to go back to school. We’ll reimburse them for the cost of that if it’s job-related. Basically, we would support a student on any science degree.”

“We find that people with associate degrees have the necessary background in science and math skills, and usually writing skills, and they can do quite well in the position,” he said.

Kinney said the biotechnology industry continues to boom in Massachusetts, particularly in the Boston area. He leads one of the few biotech companies in Western Massachusetts. Berkshire Sterile has doubled in size, from 35 to 70 employees, since last year.

Biotechnology encompasses a broad range of applications that use living organisms such as cells and bacteria to make useful products. Current applications of biotechnology include industrial production of pharmaceuticals such as vaccines and insulin, genetic testing, DNA fingerprinting and genetic engineering of plants.

According to the industry trade group MassBio, jobs in the Massachusetts biotechnology and pharmaceutical (biopharma) industry grew 4.8 percent in 2016. Companies created more than 3,000 new jobs that year.

According to a Boston Globe article about a report by the nonprofit Massachusetts Biotechnology Education Foundation, companies are having a hard time filling vacancies because the biopharmaceutical sector in Massachusetts is growing so quickly. Companies particularly need to fill entry-level jobs that require associate degrees, according to the report.

If you’re interested in applying to STCC’s Biotechnology program or have questions, call Admissions at (413) 755-3333. You can also apply online at www.stcc.edu/apply.

Click here to see job openings in the biotechnology field.

Founded in 1967 and located on 35 acres of the Springfield Armory National Historic Site, STCC is a major resource for the economic vitality of Western Massachusetts. As the only technical community college in Massachusetts, STCC, a designated Hispanic Serving Institution and an Achieving the Dream Leader College, offers a variety of career programs unequalled in the state. STCC’s highly regarded transfer programs in business, engineering, liberal arts, science and technology continue to provide the most economical options for students pursuing a four-year degree. With an annual enrollment of more than 7,700 day, evening, weekend and online students, STCC is a vibrant campus rich in diversity.